Battlefield Technology and its importance 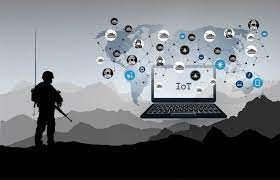 Battlefield technology has evolved over time to become more advanced and efficient. This article describes the different types of technologies on the battlefield, their purpose, and how they are used in modern warfare.

In today’s world, technology is absolutely essential for warfare. Many different aspects of modern warfare rely on the use of technology in order to be successful. One of the most important areas of battlefield technology is communication. In order to successfully coordinate and execute campaigns, commanders need to be able to communicate with each other effectively. Additionally, battlefield technology helps commanders monitor enemy movements and troop concentrations. By understanding these factors, commanders can make better decisions about how to defend their territory or attack an opponent.

Technology also plays a critical role in logistics. Without efficient logistical operations, armies would quickly become stranded without food or ammunition. The current logistics system is very complex and can transport large quantities of goods over a large area quickly and efficiently. This crucial capability allows militaries to sustain prolonged operations in difficult environments.

why battlefield technology is important

In the early days of warfare, armies relied heavily on physical prowess and brute force to overcome their opponents. The first notable example of battlefield technology was the use of catapults in Ancient Greece. This weapon was used to throw large stones and stones at enemies, inflicting serious or fatal injuries, over time, however, battlefield technology has evolved considerably, with modern militaries using a wide range of tools and weapons to achieve their objectives.

The evolution of battlefield technology

Today’s militaries rely heavily on technology to wage war. They employ tanks, aircraft carriers, and other vehicles to transport troops and supplies to the battlefield; they use artillery and missiles to destroy enemy targets, and they use computers and other electronic systems to manage operations on the ground.

The impact of battlefield technology on the warfighter

As the battlefield becomes more complex, so too does the technology used by the warfighters. From land-based sensors to combat aircraft, these technologies provide commanders with critical information that can help them make informed decisions during battle. Here are some of the ways battlefield technology has impacted warfare:

1. Technology has allowed land forces to detect and track targets over longer distances than ever before. This has made it easier for commanders to accurately target enemy forces and destroy their targets.

3. Technology has helped ground troops communicate with one another more effectively, facilitating coordinated attacks against enemy positions. By making battlefield communication easier, commanders can minimize casualties and ensure victory on the battlefield.

The battlefield is becoming increasingly technologized as militaries continue to invest in new and innovative ways to fight. Here are four of the most important current battlefield technologies.

Drone technology has been used extensively by the military in recent years in search and deployment. They are relatively cheap and easy to use, and their precision makes them an ideal weapon against targets that are difficult or impossible to reach using other methods.

3D printing has also become an increasingly important tool on the battlefield. It allows soldiers and commanders to create makeshift gear, weapons, and medical supplies on the fly without having to wait for traditional supplies to arrive. This reduces waste and ensures that troops have the resources they need when they need them most.

As the 21st century unfolds, military technology is evolving at a rapid pace. Advances in robotics, artificial intelligence, and other forms of digital warfare are making future battlefields even more complex and deadly. Here are six key technological developments that will shape the battlefield of the future:

Increasingly advanced robots are being used on the battlefield as scouts, bomb disposal units, and support troops. They can easily navigate through tight spaces and climb steep surfaces, making them invaluable for reconnaissance missions.

Virtual reality technology is already being used by militaries to train soldiers for combat duties. This immersive experience allows soldiers to practice combat scenarios in a safe environment before actually going into battle.

Best Way to Unlock Apple ID Account with or without Passcode

How 3D Video Games Are Transforming the Online...

Looking to travel in style during your next...

Digital Marketing Is the Best Way to Add...

Is A Custom Leather Jacket Really Worth It?

@2021 - All Right Reserved. Designed and Developed by PenciDesign